Solar system flashcards for the kids. Each flashcard has a Planet and some interesting facts about it. 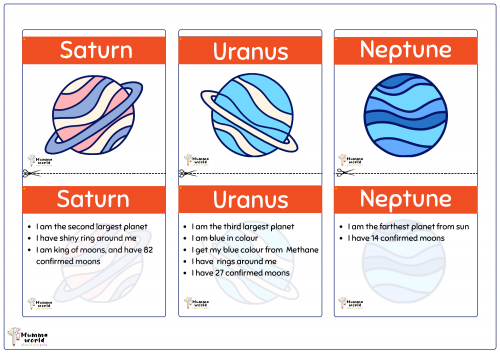 The solar system has Sun and 8 Planets.

Sun:
-I am a star and found at the center of the solar system
-Light from me takes 8 minutes to reach the Earth

Mercury:
-I am the closest and the smallest planet of the solar system
-I don’t have any moon

Venus:
I am the hottest planet of the solar system, despite not being nearest to the sun
I am the second brightest object in the sky at night, after the moon
I don’t have my own moon

Earth:
I am the only planet which supports life known so far
70% of my surface is covered with water
I have only 1 moon

Mars:
I am the second-smallest planet
I am also known as “Red Planet”, as I am red in color
I get my color from iron oxide

Saturn:
I am the second-largest planet
I have the shiny ring around me
I am the king of moons and have 82 confirmed moons

Uranus:
I am the third largest planet
I am blue in colour
I get my blue colour from Methane
I have rings around me
I have 27 confirmed moons

Neptune:
I am the farthest planet from the sun
I have 14 confirmed moons

A fun way to introduce interesting facts about the solar system.

+91 7483742166
+91 7760318886
info@mummaworld.com
www.mummaworld.com
We use cookies on our website to give you the most relevant experience by remembering your preferences and repeat visits. By clicking “Accept”, you consent to the use of ALL the cookies.
Cookie settingsACCEPT
REJECT
Manage consent